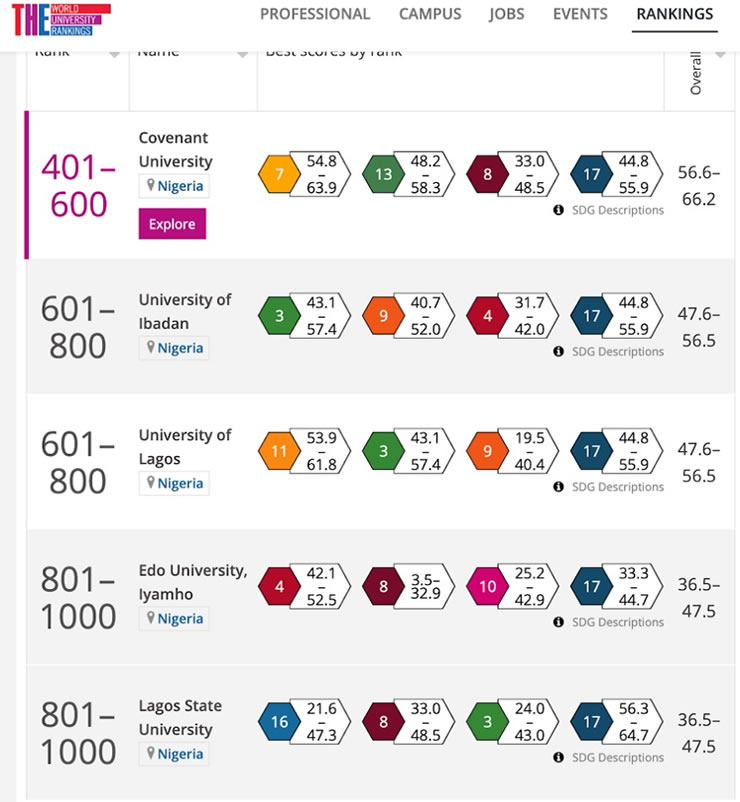 Covenant maintained her 2020 ranking of 401 – 600 to lead other Nigerian institutions in the 2021 rankings. Other Nigerian universities in the ranking include the University of Ibadan, which led the pool in 2020 courtesy of her 201 – 300 ranking, but is now ranked 601 – 800 after Covenant.

Interestingly, Covenant was ranked in all the 17 categories of the SDGs, placing 1st in most of them among Nigerian institutions. Her best ranking in the goals came from Affordable and Clean Energy (Goal 7) and Climate Action (Goal 13), ranked 101 – 200 in both categories.

In other categories of the SDGs, Covenant was ranked 401 – 600 in Gender Equality (Goal 5), Decent Work and Growth (Goal 8), Sustainable Cities and Communities (Goal 11), Peace, Justice and Strong Institutions (Goal 16), and Partnerships for the Goals (Goal 17).

The Impact Rankings are the only global performance tables that assess universities impact against the United Nations’ Sustainable Development Goals (SDGs). According to THE, carefully calibrated indicators were used to provide comprehensive and balanced comparison across four broad areas: research, stewardship, outreach and teaching.

The 2021 Impact Rankings, featuring 1,115 top universities from 94 countries in the overall rankings, was the third edition.

News of Covenant’s new prime position in the Impact Rankings came barely five days after she was adjudged “Africa’s Best World Class Private University of the Decade in Quality Education” at the 7th edition of the African Quality Achievement Award 2021.

To God alone be all the glory!

2020 National Budget Roundtable and Panel Discussion On ‘The Art Of National Budgeting and Nigeria’s Debt Profile: Sectoral and Demographic Implications’